Guest: Darren McMullen, mandolin
Anthony learned this lovely slow jig, the title of which translates as “The Tooth Fairy”, from composer André Brunet of the band De Temps Antan while sharing a stage at the Summerfolk Festival in Owen Sound, ON. When Anthony introduced it to us, we were immediately smitten with it.

Guest: Darren McMullen, mandola
A wonderfully silly song from Kate Rusby that musically suggested a jig to use as an instrumental break. The 30-Years’ Jig was written by Roger Tallroth and dedicated to his Väsen bandmate, Olov Johansson, on the occasion of Olov’s 30th birthday.

Fløteren (“The Log Driver”) is a fun contemporary tune by Norwegian fiddler Annbjørg Lien that attracted our attention because of its “floating” time signature. We pair it with Byggnan, a nearly 200-year-old Swedish polska by the venerated composer Byss-Calle (a.k.a. Carl Ersson Bössa, 1783-1847). 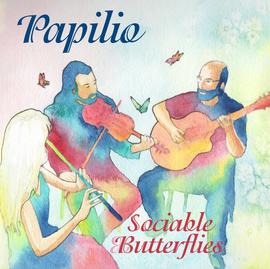 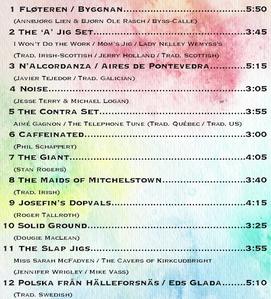 Guest: Nick Halley, percussion
Bučimiš (pronounced “boo chee Meesh”) is a traditional Bulgarian tune in 15/16 time, played for a particular Thracian dance that is performed low to the ground and in a line. Its title means “Hemlock”.

A Swedish polska­­­ from one of our favourite composers, Roger Tallroth of the band Väsen. We think Amanda’s a very lucky girl to have had such a lovely tune named after her!

You can also find our debut album First Flight (2014) on
Spotify and order the CD at info@papiliomusic.ca